With the dawn of a new generation, the ship of Guilty Gear sets sail once more. Regardless of whether you're on board as a crew member or passenger, it doesn't take much to get lost in the sea of shadowmen, homunculi, time-travelers, and dolphin-summoning sky pirates. The villain in the last game was 'Bedman', if that's any indication of what to expect. Ask a fan about Bridget; their complex response is probably the best way to sum up why the series is overlooked by the gaming media.

-Strive- enters the mayhem with a fresh style of play, trading in some of its technical nuance for a high-risk, high-reward system reminiscent of SNK's Samurai Shodown (particularly III and V). No character symbolizes this harmony of past and present quite like Nagoriyuki, the katana-wielding Nightless of Nigeria. 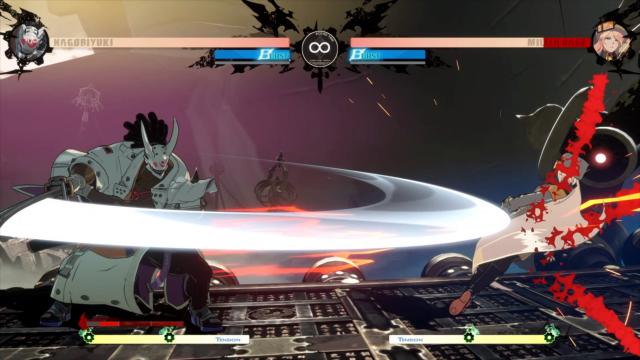 Zato-1 states that this is no ordinary samurai vampire; as someone who recently made arrangements to steal Marquis Elmdor's pants in Final Fantasy Tactics, I'm strangely qualified to agree. Though they both teleport and bite people while wielding weapons of renown, Nagoriyuki is held back by a crucial caveat not shared by other 'SamVams', or anyone else in -Strive-. He must weave this into his game plan to ensure any chance of success, but when sown together they combine into an overwhelming force with one purpose: TO DESTROY ALL ENEMIES!

Aside from his imposing frame and Evangelion-inspired bunny helmet, the most glaring feature of Nagoriyuki is the absolutely massive katana he's packing. Make no mistake, there exist craters on the moon that were made with less force than Nagoriyuki can generate. Just look what he can do to Potemkin (who has the highest defense value in the game): 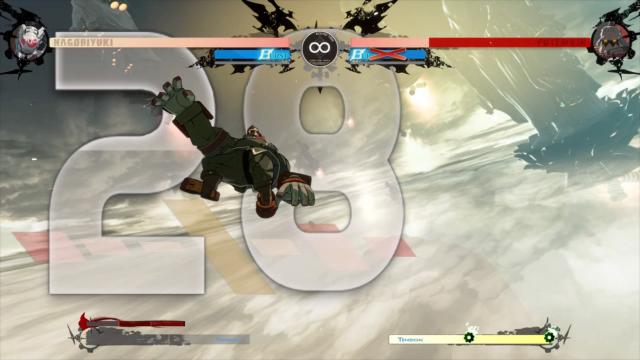 Granted, I put a little mustard on that, but its implications are horrifying. That's far from optimized; imagine what someone proficient could do to a character like Chipp Zanuff! With the exceptions of Sol, Ramlethal, and the aforementioned Potemkin, no fighter can hope to match Nagoriyuki's damage output, and all of them have to spend more resources to achieve comparable results. There's an explanation for this and it's responsible for the trait that defines the playstyle.

Nagoriyuki is unique among the cast of -Strive- in the sense that he can cancel his special moves into each other. This might not sound like a big deal if you aren't into fighting games, but those in the know can see where this is going. Not only does this allow Nagoriyuki to perform highly damaging combos while retaining his Tension Meter, it grants him the ability to cover his bets in a way nobody else can. Did the opponent block 'Kamuriyuki'? Cancel into 'Fukyo' (teleport) and retreat for better positioning. Did it hit? Cancel into a 'Shizuriyuki', cancel that into 'Fukyo' and start the fireworks. If Nagoriyuki manages to tag you and chain 2-3 special moves together, you're looking at ~40% damage plus the subsequent mix-up that can lead to even more. His archetype 'One-Shot' is as true as it gets – a single chance is all he needs to end a round. The big problem is that he may not get an opportunity. 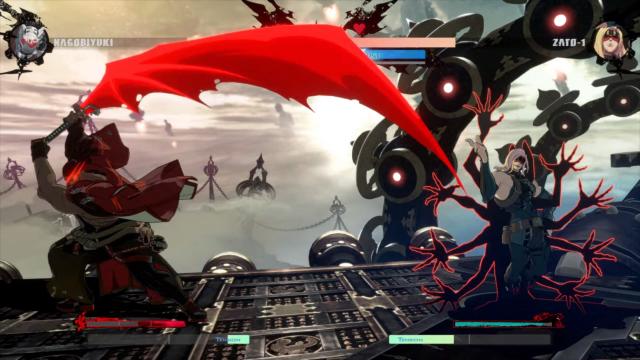 Nagoriyuki's awesome offense comes at a steep price, visually represented by the Blood Gauge above his Tension Meter. Separated into three sections, every special move the samurai performs fills the gauge by a specific amount. Between Levels 1 and 2 this is actually beneficial, giving Nagoriyuki increased damage and range on his normal sword attacks. Achieving Level 3 activates the 'Blood Rage' status effect; if it happens in the middle of a fight, the outcome dramatically shifts in favor of the adversary.

During Blood Rage, Nagoriyuki's health plummets by 50% of its current value. If the opposition doesn't make contact with the initial burst, they can retaliate with a combo that will more than likely end the round. If this wasn't enough, Nagoriyuki loses access to his special moves until the gauge resets. He does gain an additional Super - a gigantic Hail Mary swing that hits for at least 75% damage from almost full-screen. 'Zansetsu' will undoubtedly steal a few rounds, and while it's incredibly satisfying to connect with the first couple of hundred times, it becomes more and more hollow after each use. It adheres to the more extreme tenants of Dandyism (to defeat the foe at all costs), and it may follow the code of Bushido to an extent, but there's no honor in a victory that was stolen instead of earned. 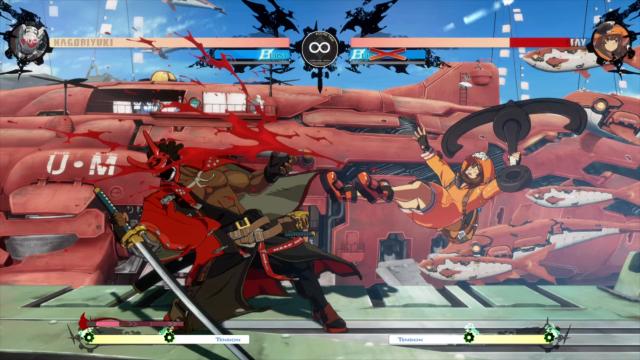 One final piece of the equation remains – Slayer's signature technique, 'Bloodsucking Universe'. Taught to him by his master, Nagoriyuki goes in close for the vampire's embrace and, upon connecting, restores a small amount of health while leaving the opponent grounded for a mix-up. Command grabs are always desirable to have in a move set, but in Nagoriyuki's case it's absolutely vital; the hinge on which the entire match rotates. If he can manage to land one of these, all previous meter in the Blood Gauge dissipates. By achieving this, Nagoriyuki's offensive momentum is restored, allowing him to continue his pressure. Bloodsucking Universe is the key to unlocking this character's potential; without it, the door to success will remain closed.

With these boundaries established, Nagoriyuki's game plan begins to emerge. The choice between eating a high-damage combo or being caught by a throw that puts them back into the same scenario is a scary position for any enemy to be in – so long as it can be sustained. Should the situation devolve from a whiffed grab or increasing Blood Gauge, Nagoriyuki must fall back on the fundamentals of Dandyism, trying to bait the opponent into a mistake and fishing for counter-hits. This tactic is enhanced further by Nagoriyuki's improved normals and the fact that the Blood Gauge decreases slightly whenever his sword makes contact with the opposition. The problem with being a pescatarian is that you must accept whatever comes out of the water. The Fisherman and The Djinni teaches us that sometimes, when you go fishing, you get to eat a big dinner. At others, you pull out a bottle containing a supernatural entity wreathed in smokeless flame who offers only death. 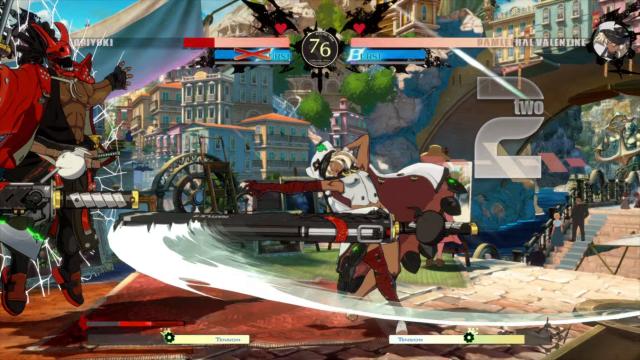 It's in this instance that Nagoriyuki's weaknesses come into focus, and the prognosis is very bad. Though he can be rather potent on offense, the same can't be said about his defensive capabilities, which are some of the worst in the game. Unlike other characters, Nagoriyuki lacks a forward dash, air dashes, and any sort of double/triple jump. He also has no reliable reversal, a critical tool for keeping overly aggressive foes at bay. Should the opponent manage to push him into the corner, Nagoriyuki's immobility hamstrings him at the time when he's most vulnerable. When 'Yellow Roman Cancels' and wake-up 'Super' (the fighting game equivalent of “Save me, God!”) are two of your stronger choices, you're staring down the barrels of a gun about to fire – and that's assuming you have the resources in the first place. Nagoriyuki can and will take a beating; it's up to the player to think their way out of every bad position he gets put into. The restrictions imposed by the Blood Gauge will afford many opportunities to learn, and since -Strive- actively rewards an offensive mindset, there are plenty of teachers online willing to offer their wisdom.

Nagoriyuki's introduction to the Guilty Gear universe has been met with great enthusiasm. He might not be riding very high on current tier lists, but it's a little early to be making too many decrees (other than the one stating that Sol Badguy is a complete bastard). With his risk/reward playstyle and absurdly high damage, Nagoriyuki is incredibly fun to play as. The restraints and benefits of the Blood Gauge force players to adapt in each fight, and his lack of defense means that they'll be growing up quickly if they want to survive in the wild. Those familiar with Sin Kiske's 'Calorie Gauge' in Xrd or The Price is Right's 'closest without going over' philosophy are at an advantage, as are the disciples of Slayer, who undoubtedly have another master to follow. The rest can pick up their katana with fresh hands and clear minds, knowing there's plenty for them to discover. 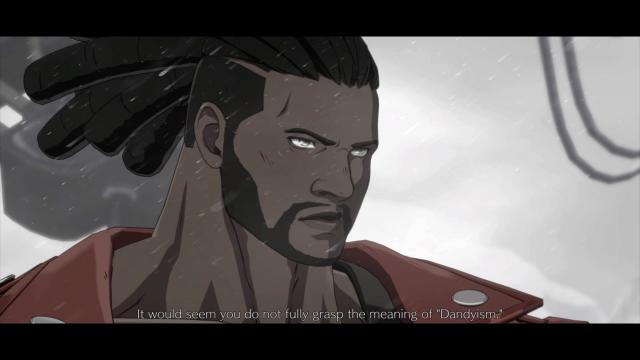 As for myself, Nagoriyuki has taught me an important lesson about presentation. I'll never be as handsome or strong as he is, but if I remain diligent in my diet, continue to exercise, and maintain proper grooming habits, even I could peddle my wares to some Bracegirdle or Bolger down in Hardbottle.

And if you believe in yourself and work hard every day in life, one day you can too.

Bushido and the Art of Dandyism: The Awakening of Nagoriyuki in Guilty Gear -Strive- - Article

Read Bushido and the Art of Dandyism: The Awakening of Nagoriyuki in Guilty Gear -Strive- - Article by VG Chartz

Karate’s Big Question in Its Olympic Debut: Is It a Sport or a Martial Art?

Read Karate’s Big Question in Its Olympic Debut: Is It a Sport or a Martial Art? by New York Times

Read Bohachi Bushido: Code of the Forgotten Eight by Moviefone

Its Bushido all the way

Read Its Bushido all the way by The Northern Echo