Germany's chancellor candidates are making their final stops in a campaign for the history books. Never before has the outcome been so uncertain. Polls show a statistical dead heat between the two parties that have shared power for three of Angela Merkel's four terms as chancellor.

Both sides would like to end that arrangement. Who will take its place — and Merkel's in the chancellery — is anyone's guess.

That has injected a sense of urgency into the race, which was on display at the top parties' campaign events. By Sunday evening, they'll know how well their messages got through to voters.

How do the German elections work?

Outgoing German Chancellor Angela Merkel made a final endorsement on Saturday for Armin Laschet, chairman of the center-right Christian Democratic Union (CDU), is the beleaguered conservative bloc's pick for chancellor.

Speaking alongside Laschet at an event in the western city of Aachen, Merkel sought to portray her would-be successor as a "bridge-builder who will get people on board."

"To keep Germany stable, Armin Laschet must become chancellor, and the CDU and CSU must be the strongest force," the chancellor said. 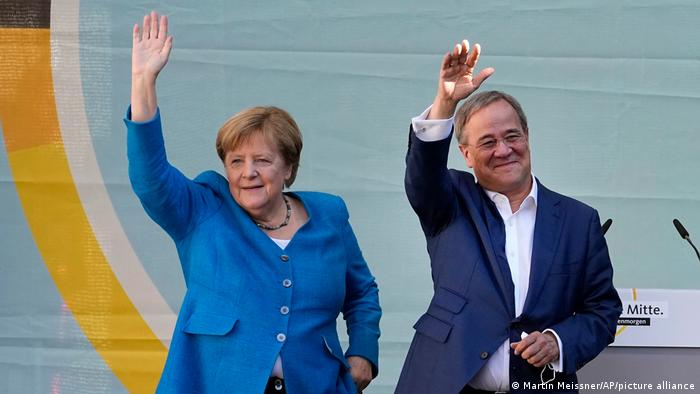 At a rally on Friday, the mood was somewhat different, with a largely unmasked audience inside a popular event space.  Laschet traveled to Munich, the capital from which the CDU's sister party, the Christian Social Union (CSU), rules Bavaria.

He took to the stage the same message of foreboding he and his allies have been pushing for much of the campaign: Beware of the left.

He stressed the need for a German government to guarantee security, both economic and otherwise.

"Taxing the middle class is the wrong way. We stand with Germany's middle class," he said.

In his 30-minute address, Laschet credited conservative rule with law enforcement’s ability to foil an alleged attack on a synagogue earlier this month, which was reportedly thanks to a tip from a foreign intelligence service.

"Imagine being represented in the world by red, red, green," Laschet said, referring to the colors of the Social Democrats (SPD), the socialist Left, and the Greens. "Do you think anyone would share information with us? Would anyone take us seriously?"

Laschet, who may be leading his center-right Union bloc to its worst result ever, is relying on its conservative base to turn out on Sunday to stop the center-left surge and give him a fighting chance at forming a coalition government. Yet his party's support for him has long been lukewarm, despite winning both the leadership and chancellor candidate contests earlier this year. The campaign's choice of location meant that CSU leader and Bavaria's state premier, Markus Söder, was the event's de facto host. He is more popular than Laschet nationally, and was the preferred candidate for many party insiders, but struck a supportive note on Friday.

"We will turn the game around on Sunday evening, catch the SPD and be the number one in Germany," he said.

Söder warned against voting for the pro-free market Free Democrats (FDP), a common Union bedfellow and Laschet's favored coalition partner. Söder said that one could already feel the "most immoral vibrations" between the SPD's Scholz and FDP leader Christian Lindner, alluding to Lindner's alleged ambition to become finance minister in a new government.

Söder received a boisterous standing ovation from an audience at long beer hall tables covered in white tablecloths. There were plenty of trademark Bavarian beer mugs and pretzels to go around.

The center-left SPD's chancellor candidate, Olaf Scholz, stuck close to home on Saturday, holding a smaller "dialogue" event with voters in his constituency in Postdam, outside of Berlin.

During his appearance in Potsdam, Scholz said forming a governing coalition with the Greens would be his "favorite" outcome for the election.

He added that a Scholz-led cabinet would be "half men and half women."

In his last major rally for the SPD on Friday, Scholz traveled to Cologne. He has exuded increasing confidence as his and his party's electoral fortunes have turned around. Long counted out of the race, the SPD now finds itself ahead by a few percentage points.

That confidence was on display at Heumarkt, a large square just off the Rhine River, where a few hundred, mostly masked people gathered to listen to the man who has served in Merkel's government and now hopes to lead the next one.

"After such a long campaign, there's something quite special about standing here now," Scholz told the crowd, standing before a large video screen that read "Germany's future: Scholz takes it on." (Scholz packt das an) 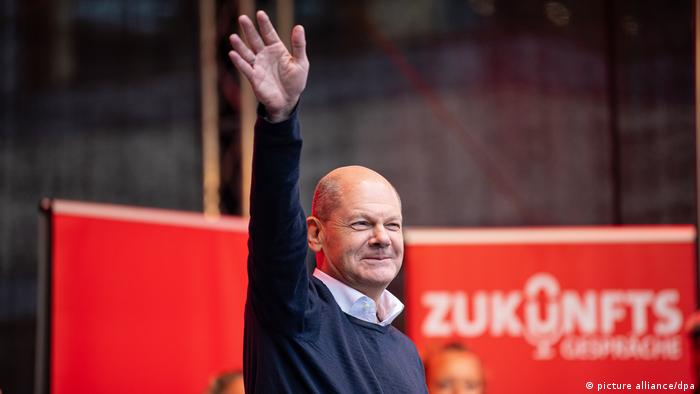 Scholz is leading in opinion polls, but the gap is still within the margin of error

In a roughly half-hour-long speech, he talked up his plans for increasing the minimum wage, raising taxes on the wealthiest, helping the neediest more, keeping pensions stable, and investing in renewables. His remarks were peppered with his campaign's keyword, "respect."

"In a country as wealthy as Germany, it is not acceptable that so many children live in poverty," he said.

Their policies may differ, but the Greens share the Union's frustration with a campaign that has not gone to plan. Their distant third place in the polls is nearly double their 2017 electoral result, but it is a far cry from the highs they saw earlier this year when there was brief talk of them leading the next government.

Their chancellor candidate, Annalena Baerbock, can also relate to Laschet's struggles with party support. Critics say Robert Habeck, who leads the party with her, would have been the better pick.

The two made a joint appearance before party supporters on Friday in Düsseldorf, the capital of Laschet's home state of North Rhine-Westphalia.

If there is any love lost between the Greens' leaders, it didn't show. Habeck made a full-throated case for Baerbock's candidacy, and the party agenda she has campaigned on. Merkel's conservatives have played a game of "hot potato” with accountability, he said.

"We need politicians who are once again ready to use the time they have to bring out the best," Habeck told the several hundred people, mostly in masks, who came to Schadowplatz, a shopping area in the city's old town.

After a musical interlude, Baerbock took to the circular stage in the center of the crowd and picked up on the same theme.

"Everything hinges on this election," she said. "Do we just keep on with the status quo, or do we finally achieve a new breakthrough? Do we renew this country and get the best out of it?” 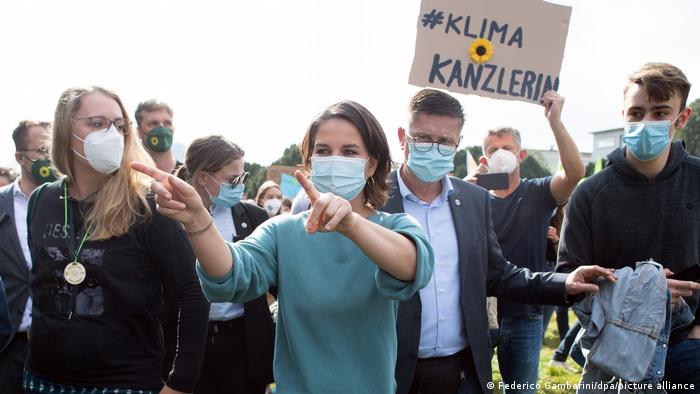 Baerbock has called the vote on Sunday a "climate election," and at least some of the Greens' climate policies are likely to make it into the next government's agenda.

"If we can build our industry with clean energy, then we can secure our country's prosperity," she said, under a banner that read, "Do you want a climate government? Vote Green."

They may fall short of the chancellery, but both Baerbock and Habeck could be up for ministerial positions in the next government. Though the Greens have indicated their preference to govern with the center-left SPD, the party stands a good chance of being in government no matter which way it leans.

With the conclusion of Friday and Saturday's events, the parties' supporters go off to vote on Sunday — if they haven't done so by mail already. Postal votes are expected to be at an all-time high this year, which means many Germans have already made up their minds.

However, a tight race in a highly fragmented field means none of the parties is doing particularly well. The candidates are under pressure to grab every vote, hoping to succeed Angela Merkel and her conservative-led rule.

While you're here: Every Tuesday, DW editors round up what is happening in German politics and society, with an eye toward understanding this year’s elections and beyond. You can sign up here for the weekly email newsletter Berlin Briefing, to stay on top of developments as Germany enters the post-Merkel era.

Republican candidates can ignore Trump -- but he wont go away

Read Republican candidates can ignore Trump -- but he wont go away by CNN on MSN.com

Read With Virginia governors race looming, Biden takes to CNN town hall to pitch his agenda to voters by USA Today on MSN.com

Dont forget to cast your ballot in city elections