Fish games aren’t at the beating heart of the video game industry, it’s fair to say. Well, not unless you count COD.

But this ancient activity crops up quite a lot in games that don’t otherwise profess to be simulators of it, often providing a welcome diversion from the tiring business of saving worlds. Then there are the more laser-focused titles that accept their niche appeal and simply do their damndest to convey every detail of the sport in a palatable and enjoyable fashion.

Like a trawler using banned EU nets, we’ve scoured the very depths and then picked out only the very best depictions of fishing in games for your delectation. Please enjoy, and forgive that earlier COD pun. Just be thankful I scrapped my first idea about It Takes Tuna. 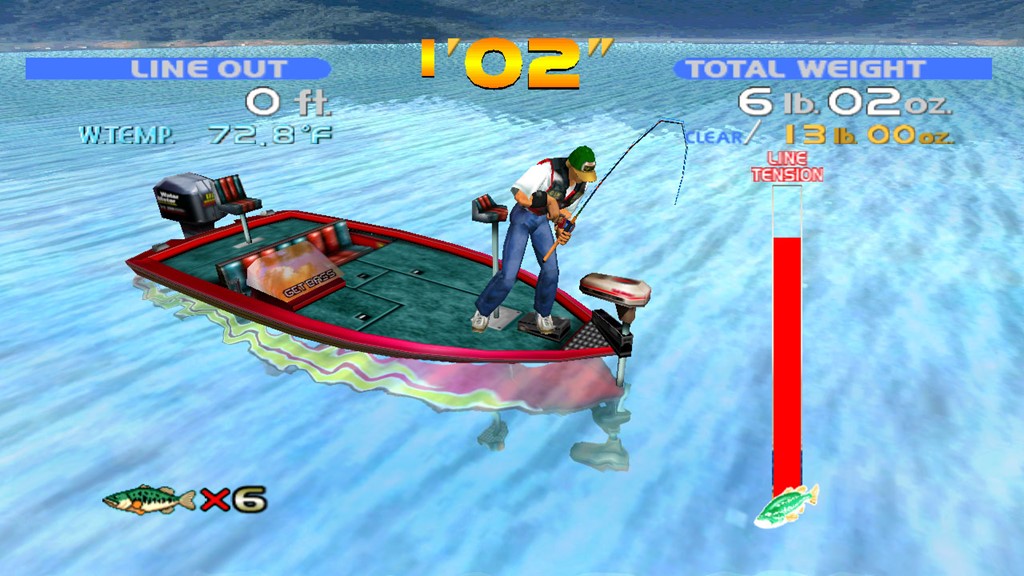 You kids, with your Nintendo Wiis and your Black Eyed Peas, telling your friends ‘That’s so random!” on your Blackberries. You think you’re soooo cool and modern, don’t you? Well guess what – Sega Bass Fishing got in there well before Wii Sports with motion control sports games.

That’s right, your old Grandpa Phil was reeling them in all the way back in 1999 on the Dreamcast that let’s say for the purposes of this article he owned. Sega’s improbably popular arcade fishing game featured an actual rod that you waggled about, trying not to be distracted by how much cooler the kids on Silent Scope looked. So when the Japanese publishing legend ported it to its new console, it bundled a rod with motion control in with the game. We were, if you excuse the excellent wordplay, hooked. 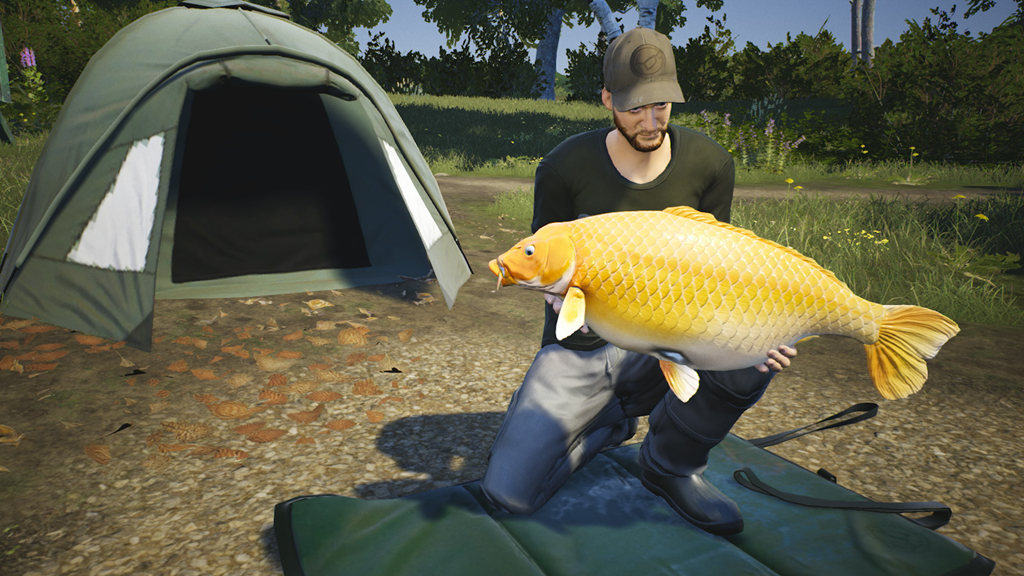 One of the more realistic propositions out there, Euro Fishing is showing its age now having released in 2014 but proves no less rigorous a sim for all the time that’s passed. Its avatars do have a haunted quality and look just as likely to appear in a documentary about opiate abuse as a fishing game, but there’s an attention to detail here that keeps the more dedicated enthusiasts at their pegs.

Bait type, lures, time of day – it all matters here. That means your first few trips aren’t going to involve pulling many leviathans out from the deep, but for those in it for the long haul Euro Fishing knows all the best spods in town. 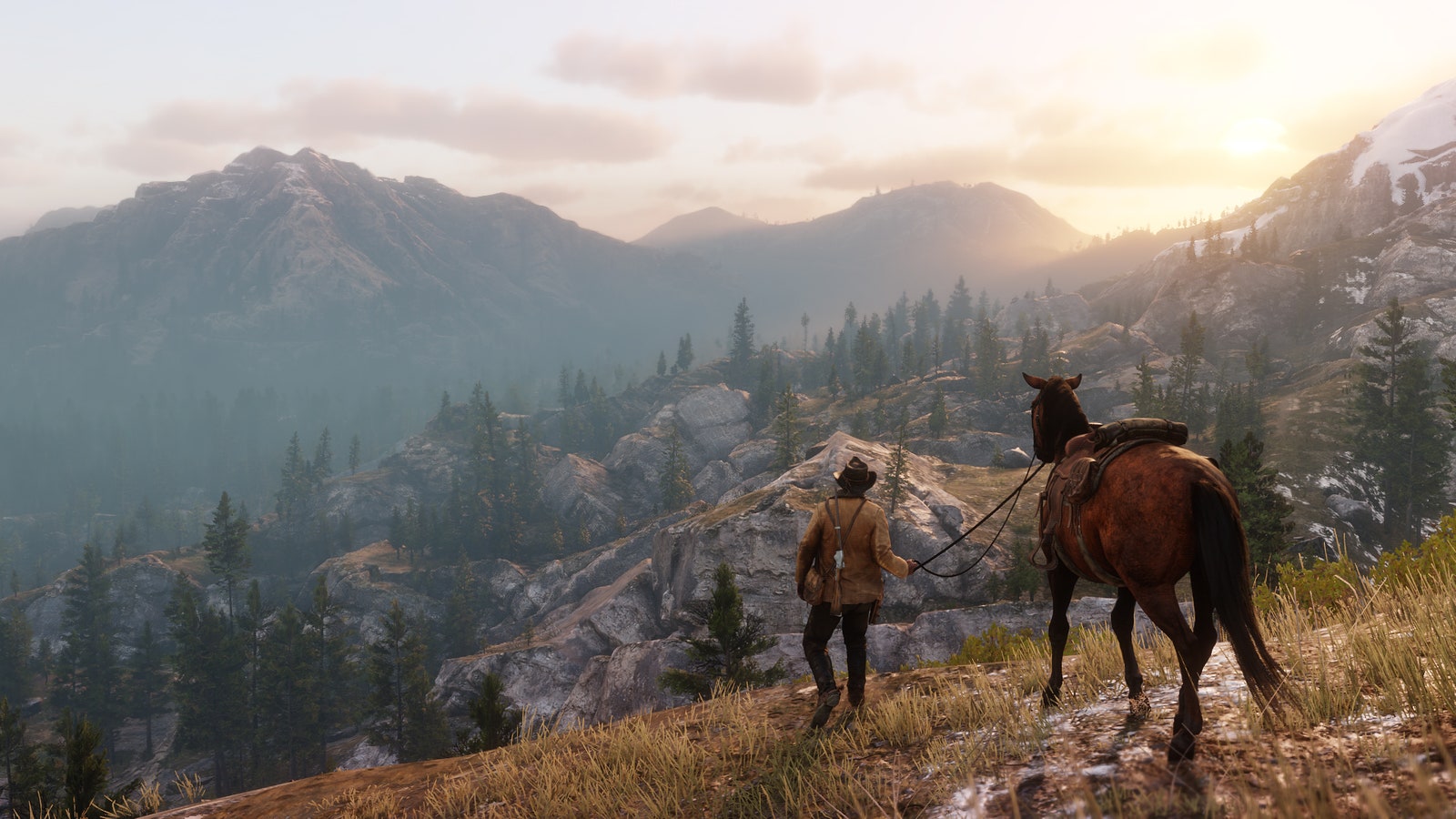 Hunting seafood has changed since the 1800s, and there isn’t a thing Red Dead Redemption 2 can do about it. Anyone looking for a modern-day sim had best look at some of the other entries on this list, but there’s nonetheless a surprising variety of fish types and sizes lurking in the freshwaters of Rockstar’s title.

Like any fishing endeavor, patience is required, but if you get bored you can always go off and have a shave, or change your clothes, or meet up at camp for a chat or a game with your friends, or rob a bank, or take part in a carefully scripted story campaign with tens of hours of content. 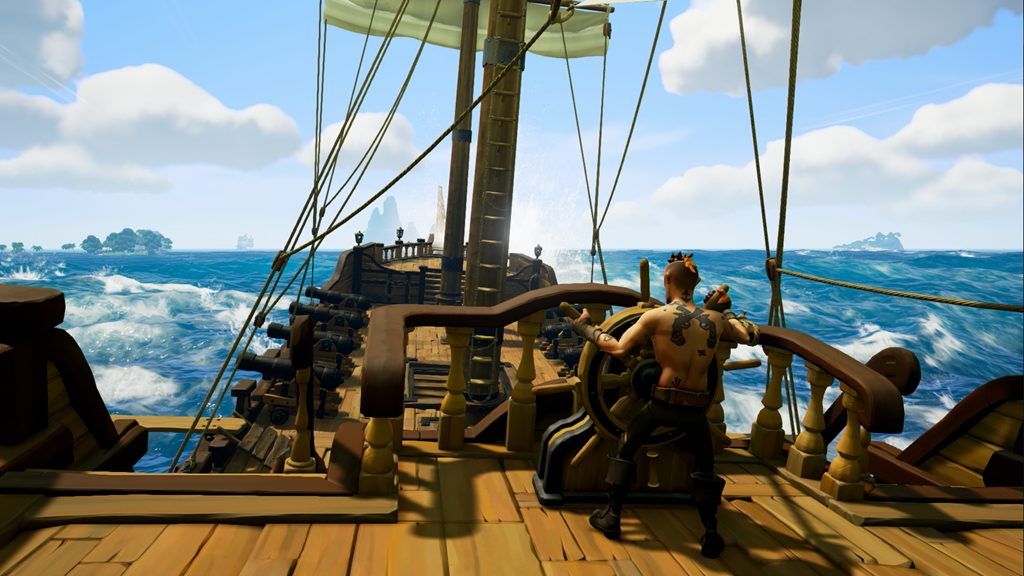 It’s a pirate’s life for this rabble. A life of drinking grog until one’s shoes are covered in vomit, stuffing oneself into a cannon and firing it at an enemy ship, general pillaging, plunder, and sitting very still with a rod by some still water, waiting for a bite.

As with many entries on this list, fishing is as much a distraction from the main event as anything in Sea of Thieves. But a rewarding distraction it proves. Easily as much as practicing the hurdy-gurdy. 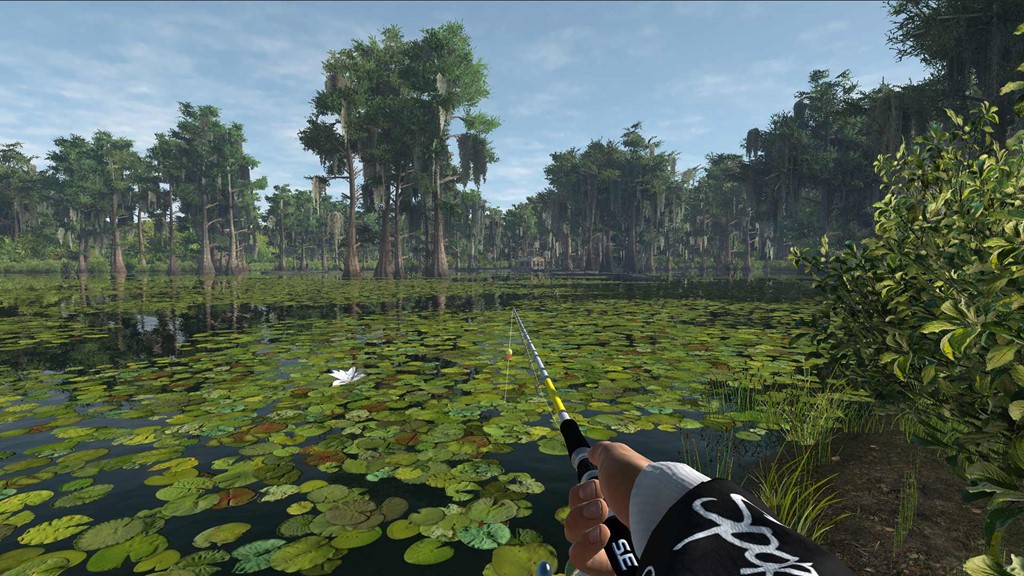 Not to brush past the 70+ breeds of fish, 12 lovely and relaxing waterways, and very involved fishing mechanics here, but it’s impossible not to note that the trailer for Fishing Planet features some of the most brutal down-tuned metal since DOOM 2016. Rope-thick guitar strings, strummed with incandescent rage to a primitive beatdown rhythm – exactly what I hear in my imagination when I think of fishing on a lake. You’d half expect to pull Born of Osiris out of the water after watching that video.

As the all-encompassing name suggests, this is a game where hunting fish is the be-all and end-all, not a minigame. It’s also free to play, so might be a nice place to start for serious enthusiasts. 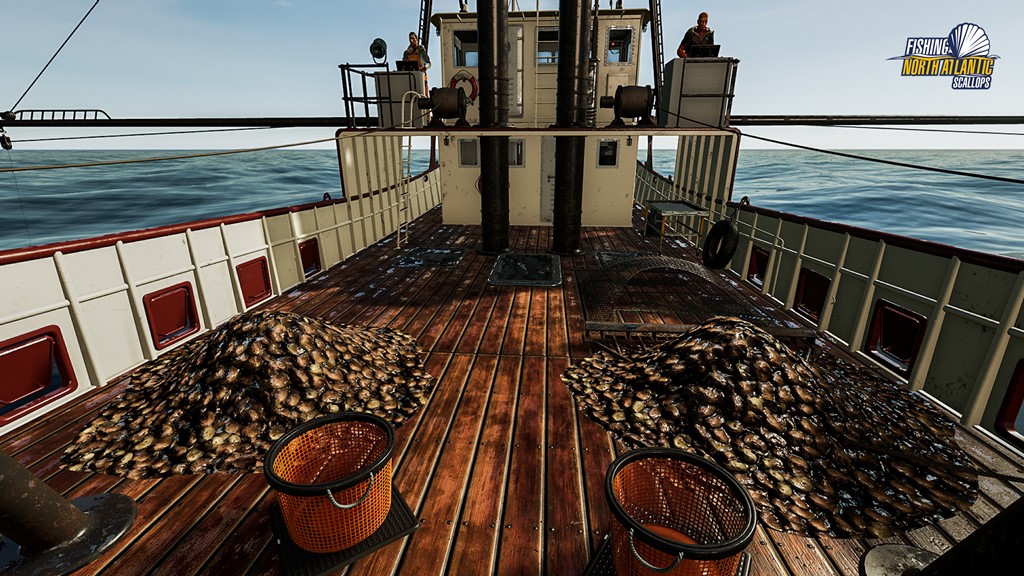 Commercial fishing is to sitting with a rod by a lake what Giannis Antetokounmpo is to your Wednesday night pickup game, and Fishing: North Atlantic places its focus squarely on it. The focus shifts from choosing a nice lure to reading maps and weather forecasts, controlling a large fishing boat, and operating industrial-grade gear (or just harpooning them out of the water to show those no-lung-having upstarts who’s top of the food chain). And if you think your work’s done when the fish, crabs or lobsters are onboard, think again: time to box them up.

In that way, it’s more of a job simulator than a pure fishing sim, but a fastidiously detailed, and often strangely atmospheric, one it is at that.

The Legend of Zelda: Link’s Awakening 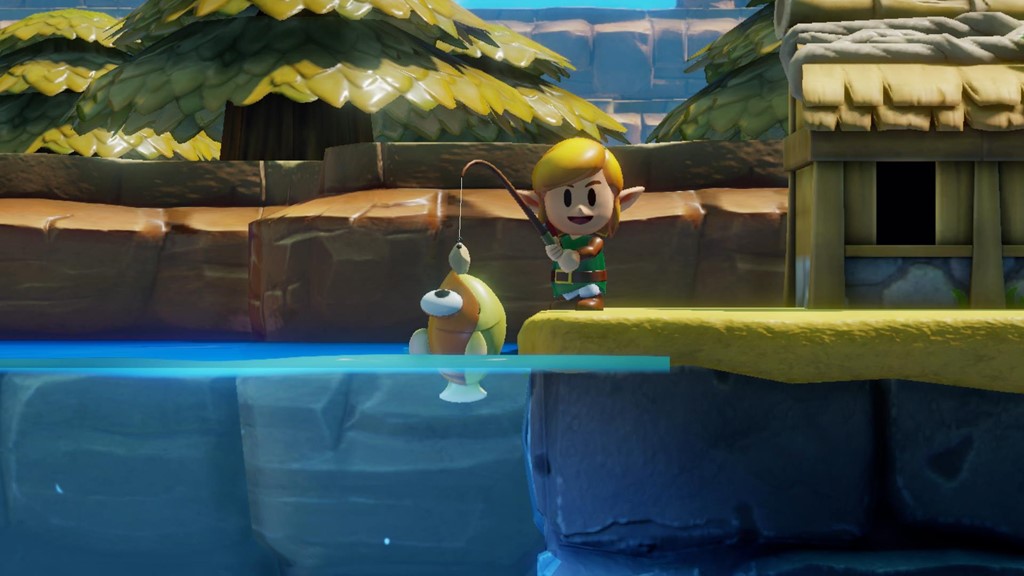 Appropriately enough for a game about a dream island, everybody slept on Link’s Awakening in the ‘90s, heads turned instead to A Link To The Past on SNES and Link’s subsequent forays into 3D worlds. But what a mighty game it was, a tender and touching experience brimming with memorable characters, packed somehow into a Game Boy cartridge. Thankfully the 2019 Switch remake gave it a chance to get the appreciation it deserves.

Oh, and there’s a fishing lake. In between puzzling through dungeons, trading Yoshi dolls for ribbons for dog food, and playing magical instruments to a sleeping Wind Fish that lives in an egg on top of a volcano, you can go and hang out by the lake, chill out, and reel in some Lunkers for prizes. 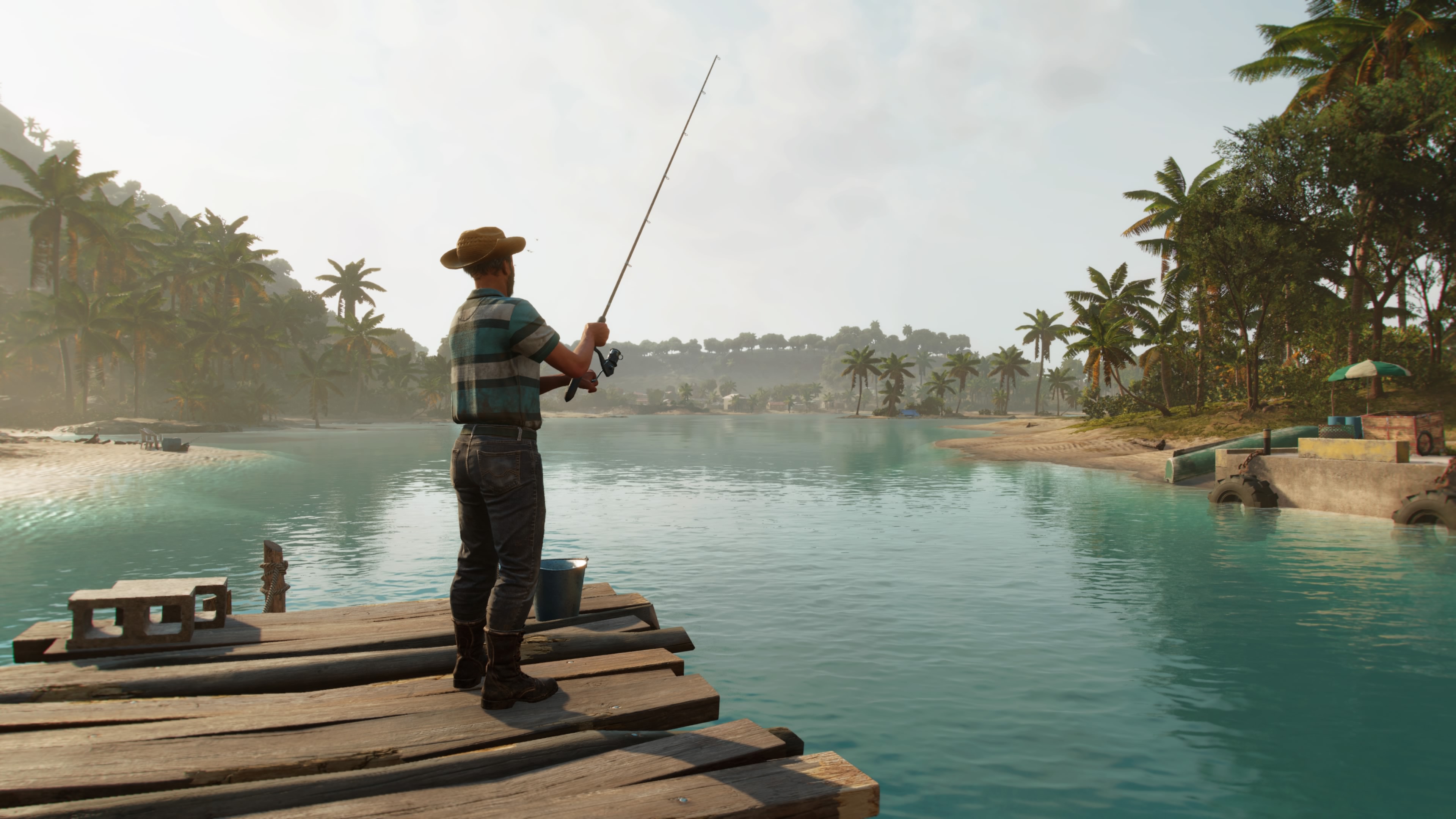 Truth be told, there are probably more pressing things to be getting on with in i">

Enjoying nature in this context meaning looting orange tackle boxes and upgrading your rod using, somehow, gunpowder and pulling out a massive barracuda from the crystalline shores of Yara. That’ll show those greedy despots. I guess. 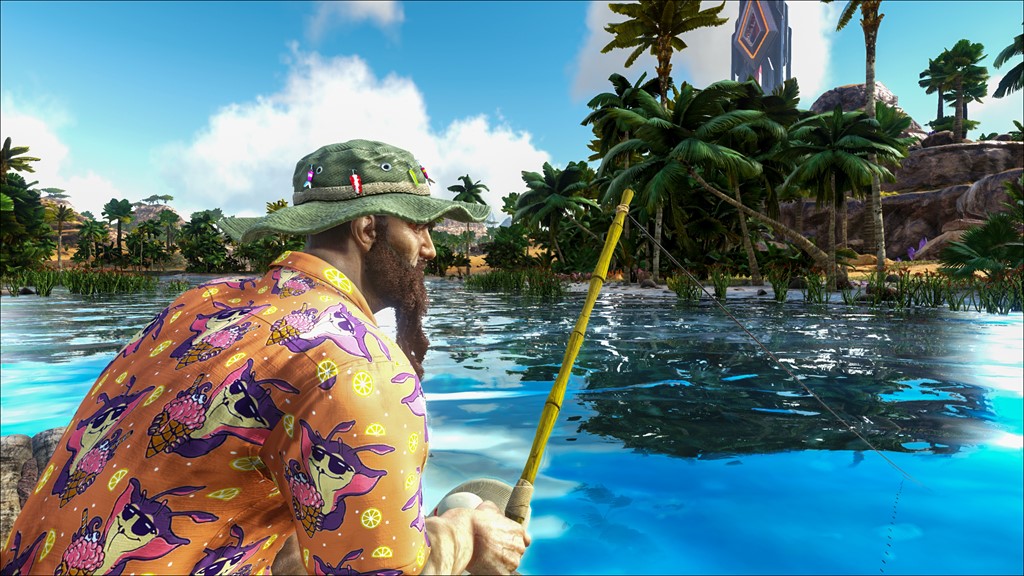 How did man catch prehistoric fish in the distant past? Or… future, or whatever the holy heck’s going on in ARK: Survival Evolved? Easy. They crafted wooden rods, sat down on wooden chairs or canoes, attached some sap to their line and pulled in a coelacanth.

There’s as much depth to fishing here as anywhere else on this list, even the dedicated fishing simulators. Breeds are varied, from salmon to piranha to rare underwater giant, the leedsichthys. Bait types are numerous. And although we’re not sure if the science of using ancient amber to attract fish truly checks out, it’s enjoyable doing so. 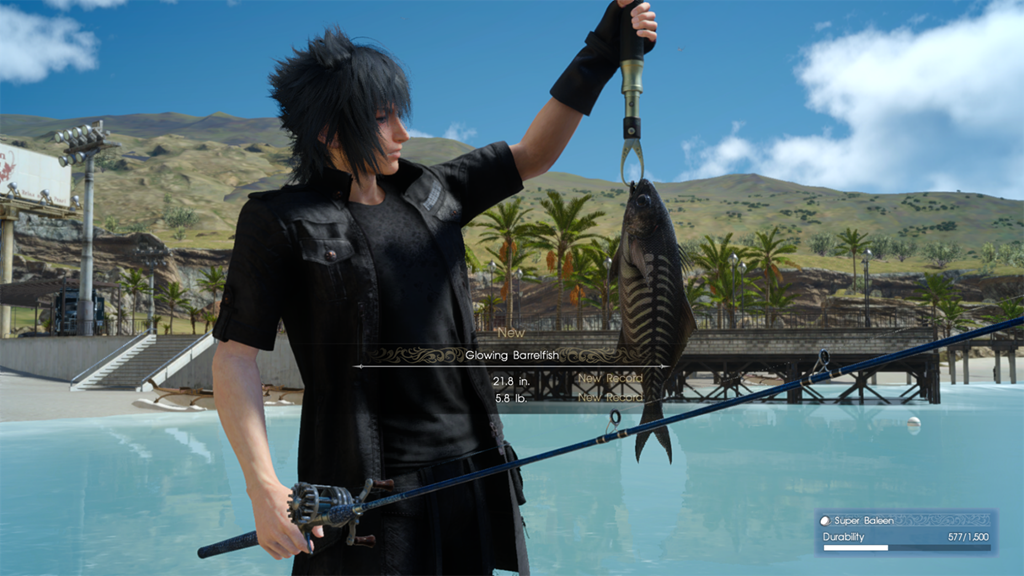 It isn’t just that the fishing mechanics are genuinely deep and gratifying, or that someone at Square Enix obviously spent an inordinate amount of time modeling, texturing and animating numerous fish that most players would never see to an insanely high fidelity standard. It’s what fishing means in i">

Written by Phil Iwaniuk on behalf of GLHF.

Fishing games that’ll get their hooks in you

NE Fishing Expo is this weekend

Read NE Fishing Expo is this weekend by RICentral.com

The One That Almost Got Away

Read The One That Almost Got Away by LinkedIn

The Most Humbling Place in the World to Fish

15 Outstanding Products to Organize Your Garage in 2022

Read 15 Outstanding Products to Organize Your Garage in 2022 by Newsweek on MSN.com

Ice fishing has begun in Michiana. Here are pointers on ice, bait and must-have gear.

Read Ice fishing has begun in Michiana. Here are pointers on ice, bait and must-have gear. by Yahoo News