As much as we can learn to appreciate every NFL team playing every weekend throughout the fall, there’s something different about playoff football. Aside from the obvious aspects of sudden death glory (ho-hum), January is where every team thinks they have a shot at winning the Super Bowl. Of course, most of those teams’ aspirations will prove to be delusional and utterly misguided in due time. Reality is often disappointing.

But the social media hype videos, the “nobody believes in us” speeches (even when you’ve won your gauntlet of a division)—they all last forever. That’s the magic of the postseason: Truly anything can happen. Plus, you can make up critics who don’t exist—what a dream.

With Wild Card Weekend on the very near horizon, let’s examine the most significant reason, the fatal flaw, that may prevent each of the 12 teams from making a deep playoff run. 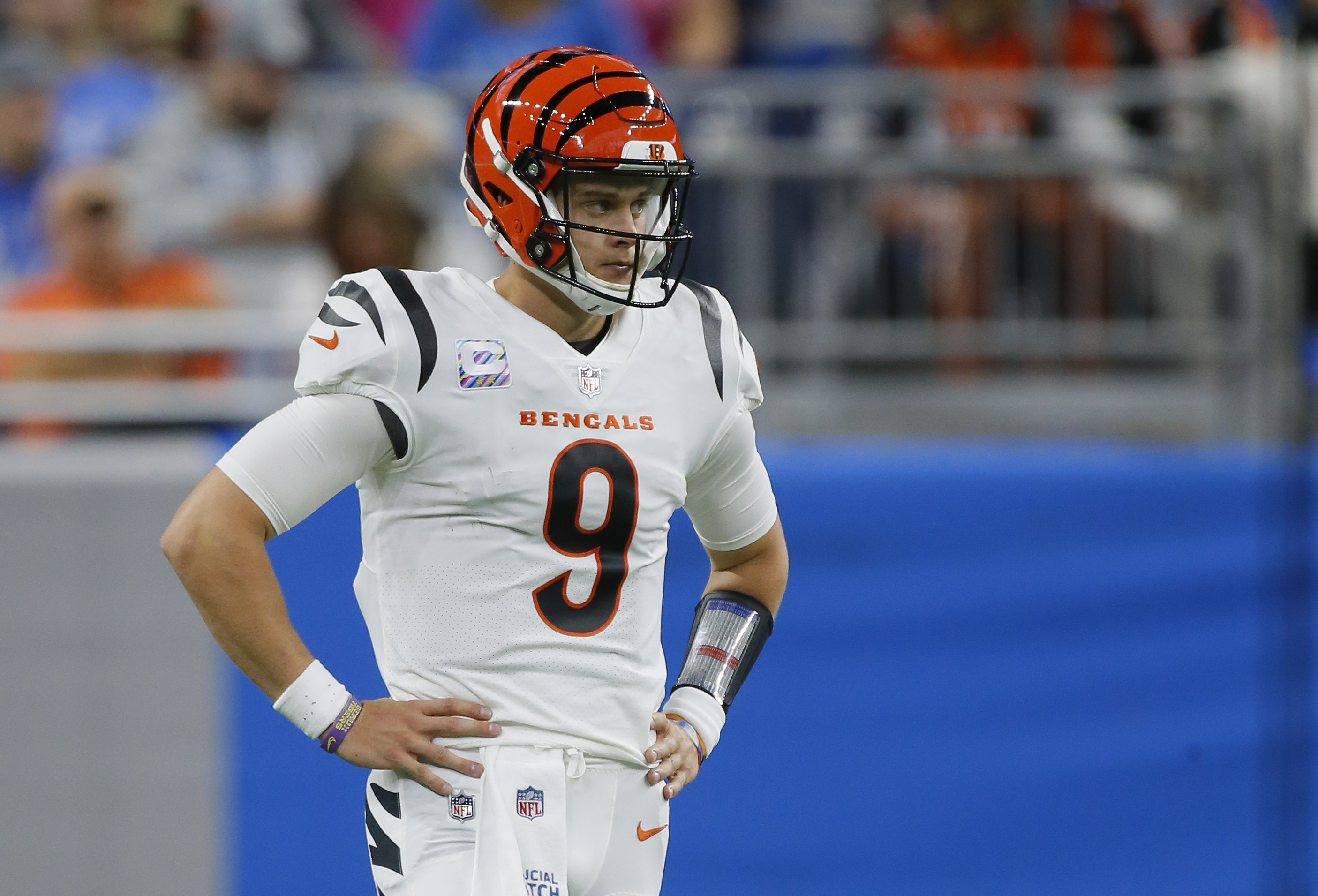 The Bengals could be a scary dark horse because of a passing trio led by Joe Burrow, Ja’Marr Chase and Tee Higgins. They could also sputter out entirely because of an offensive line that fails to give Burrow enough time to get the ball to his two monster receivers.

Only the Ravens (58) and Bears (57), two decidedly non-playoff teams, allowed more sacks than the Bengals (55). Only the Falcons (130), Bears (114), and Ravens (112) allowed more quarterback hits than the Bengals (109). Knowing Burrow was on the ground so often, it’s beyond impressive that Burrow, Chase, and Higgins were even able to enjoy such stellar seasons.

The Bengals better hope they can keep Burrow upright long enough to make big plays because playoff pass rushers are no joke. 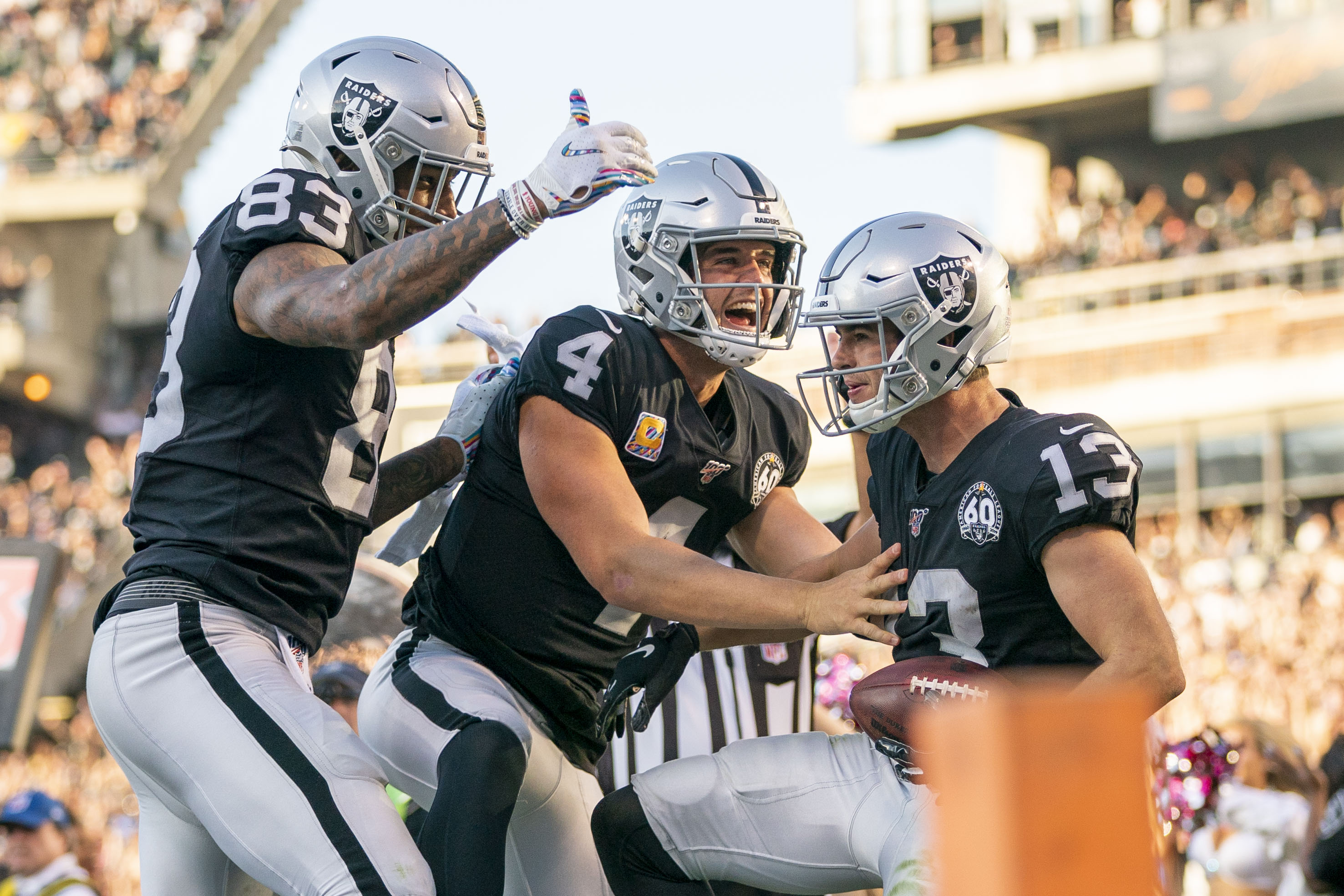 You have to commend the Raiders and interim coach Rick Bisaccia for how they salvaged their season after the dismissal of Jon Gruden in early October. Las Vegas won four straight games to close the year, and depending on the matchup; it looks like the part of a team that could give any heavyweight issues later on in the playoffs.

That is if they can find a way to stop teams from scoring once they get to the red area. This season, no team was worse in red-zone defense than the Raiders, who allowed a touchdown an astonishing 81 percent of the time (uh, wow) once their opponents reached the red zone.

There’s bend but don’t break. Then there’s crumbling altogether like the Raiders. 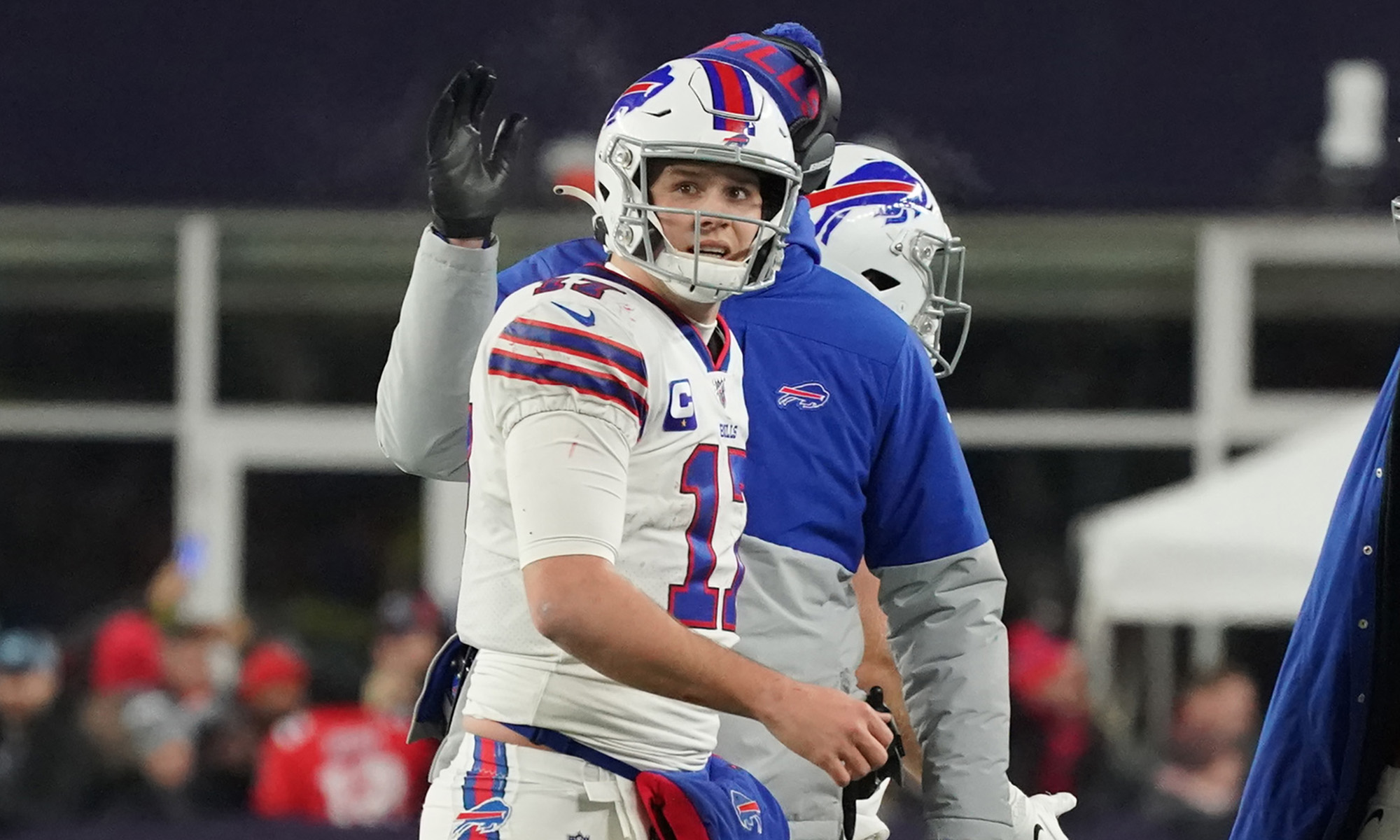 Look, some playoff narratives are indeed drummed up purely for the storylines. There’s no getting around that. But how Josh Allen performs when the weather gets frightful is something the Bills should be very wary of, considering how much they lean on their star quarterback.

In five career games where the temperature was freezing or below, Allen has a meager TD-INT ratio of 6-7, averages six yards per attempt, and only completes 50 percent of his passes. That’s a far cry from the sleeper MVP-level quarterback who’s broken out over the last two seasons.

If it’s any consolation, every quarterback struggles in the cold. And that’s part of the game when it comes to January pro football. It’s just that Allen will have to conquer these demons against the NFL’s No. 1 defense. 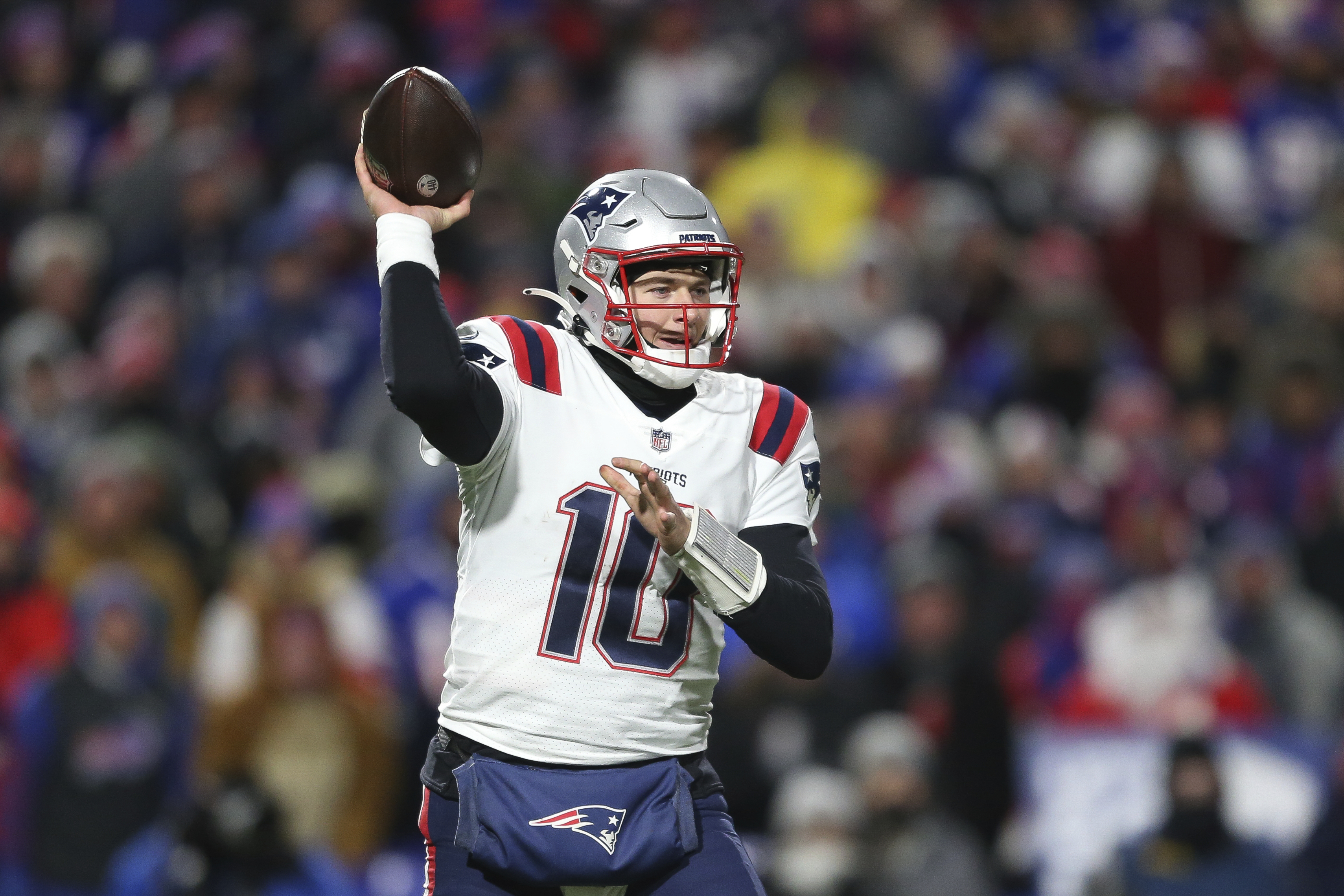 There may be a future where Mac Jones is a trusted veteran who runs a well-oiled machine for a perennial, well-built Patriots contender.

But that future isn’t now.

Jones did have a solid rookie season. Inarguably, it was the best of any of his fellow rookie quarterback peers. But Bill Belichick would be lying through his teeth if he said he had the utmost faith in him to put the ball in his hands over and over in a do-or-die playoff game.

Not only did Jones average the least amount of pass attempts per game (30.6) amongst every playoff team but two (the 49ers and Eagles), there were times when it was pretty obvious the Patriots were not comfortable leaning on him. (See: three pass attempts, Buffalo)

Those teams who can count on their quarterback when the going gets tough are those who win in January. It’s fair to question whether the Patriots believe enough in Jones at this stage to do so. 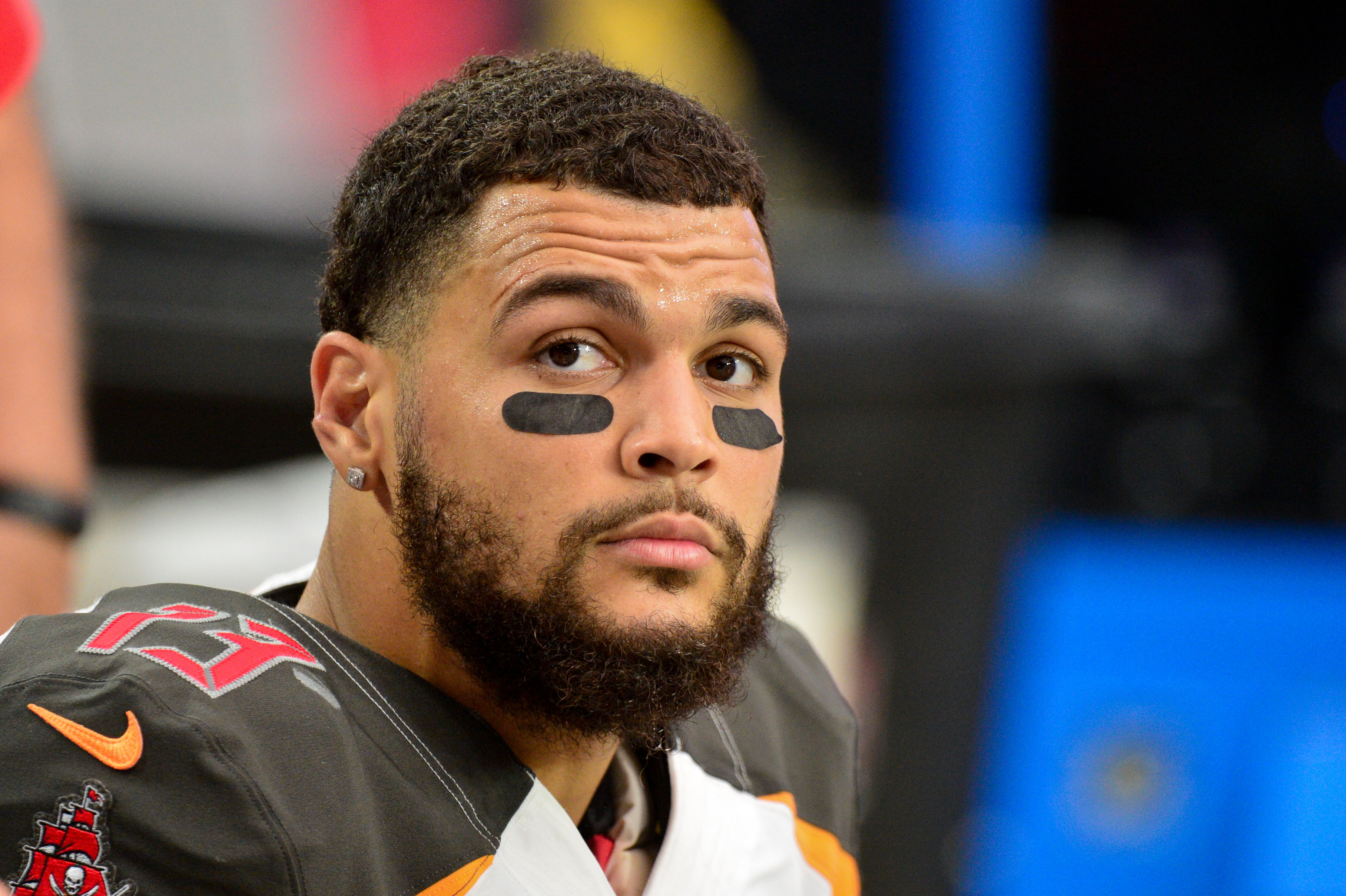 Arguably no one could’ve used a bye week more than the Buccaneers heading into the playoffs. Already without Chris Godwin and Richard Sherman (who are both on injured reserve), Tampa Bay might also be missing essential starters like Lavonte David, Leonard Fournette, Sean Murphy-Bunting, and Carlton Davis when they take the field against Philadelphia.

To be clear: Now is not necessarily the time to count out Touchdown Tom. Tampa Bay still has one of the best overall rosters left. It’s not surprising they were able to win 13 games. But in the playoffs, every inch can make a difference. And, most often, it’s the healthiest teams still standing when the dust settles. 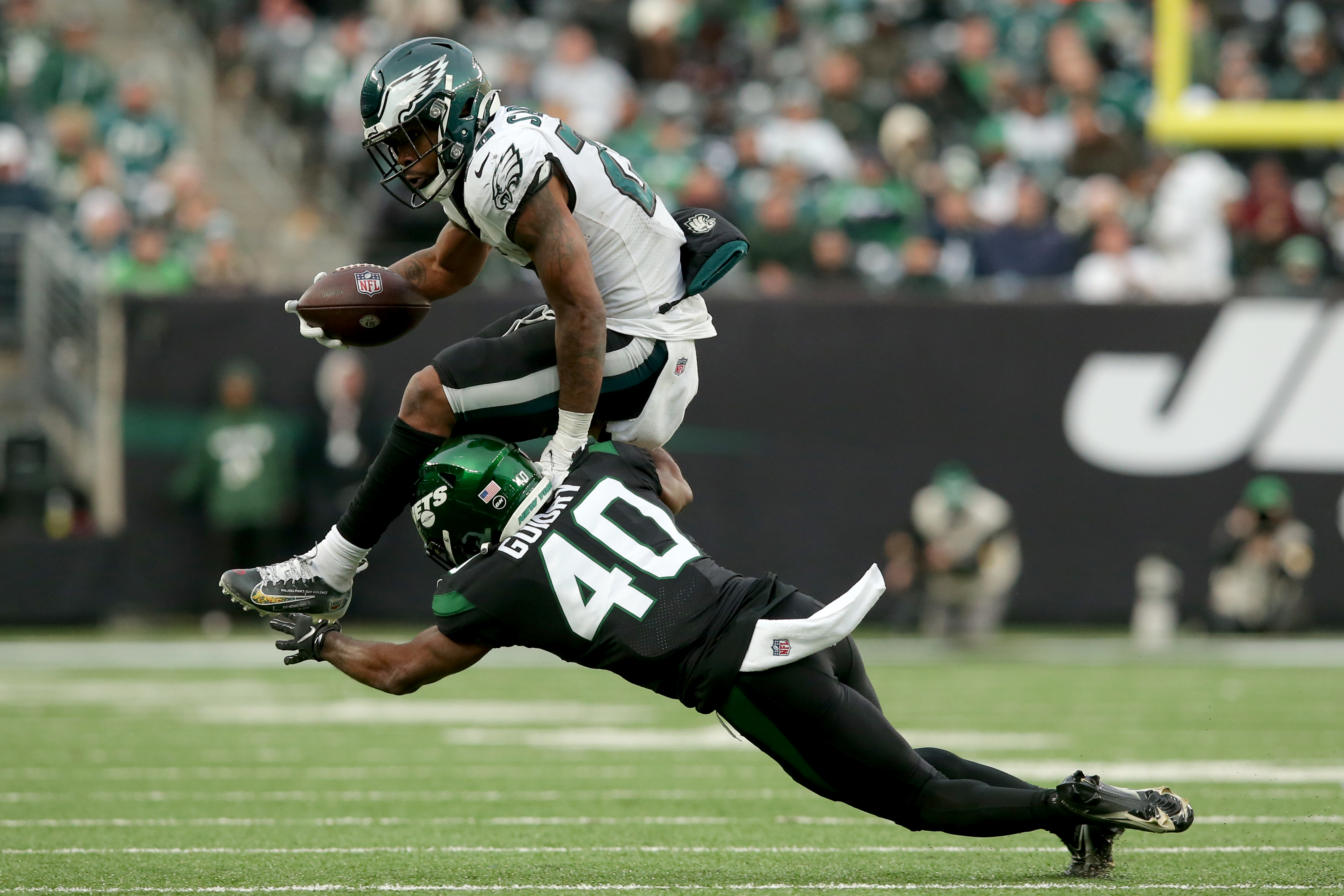 On a statistical basis, in his first year as a full-time starter, Jalen Hurts had one of the better dual-threat seasons for any quarterback in recent memory. After all, it’s not often a quarterback throws for 3000+ yards, rushes for 1,000 yards, and runs for 10 touchdowns.

Unfortunately for the Eagles, a lot of that responsibility for Hurts is by necessity, with nowhere else to go. Because outside of DeVonta Smith (who broke a franchise record for receiving yards), Hurts has no one reliable on the outside to throw to. Second-year receiver and 2020 first-round pick Jalen Reagor has been a massive disappointment thus far (695 career receiving yards). Meanwhile, guys like Quez Watkins would probably be better as third or fourth options in more dynamic passing offenses.

There’s always the chance Hurts can take over a playoff game by himself, as he did so often to help the Eagles into the postseason. He’ll have to, especially if any defense keys in on Philadelphia’s limited weapons. 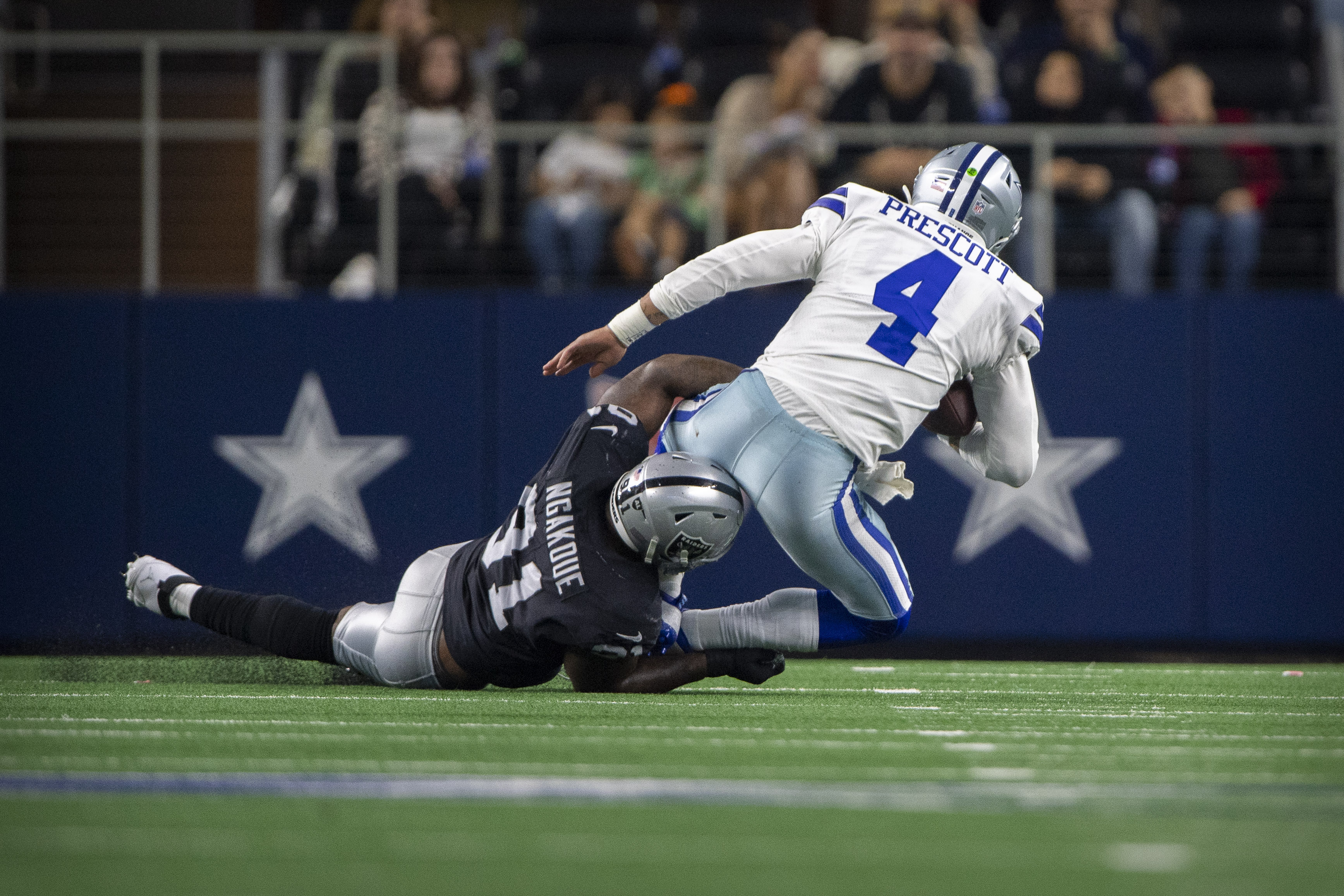 Let’s be clear: The Cowboys have enough talent to beat anyone. It would not be a shock to see them hoisting the Lombardi trophy next month. A phenomenal +172 point differential (only bested by the Bills) is evidence of what they’re capable of.

But, unlike the other contenders, they’re probably a lot more susceptible to laying an egg. Save for the division-rival Eagles, Dallas lost three straight games to current playoff teams (the Cardinals, Raiders, and Chiefs). And each defeat was convincing enough to question whether the Cowboys possess the fortitude to lock in for an entire extra month of football.

A young Dallas team isn’t going away any time soon. But they could very well go home early this year if they don’t cross their t’s and dot their i’s. 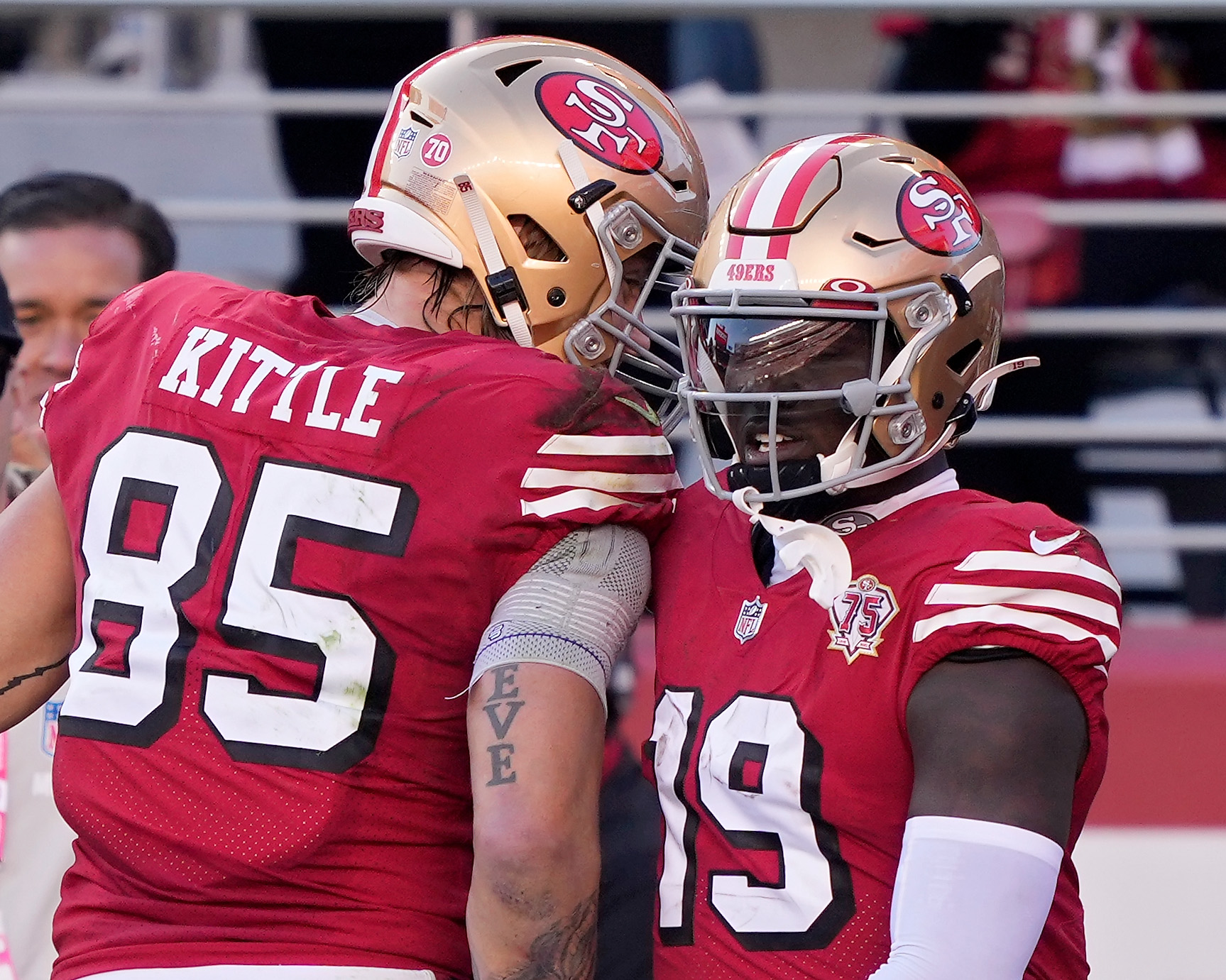 The issue is whether “solid-enough” can carry a 49ers team that seems primed for another deep playoff run. In each of his last two starts (sandwiched in between a broken thumb injury) of the regular season, Garoppolo threw two picks. His performance, on the whole, was enough to draw questions on whether rookie Trey Lance (never an ideal) should take the helm. Not many playoff teams have ongoing quarterback controversies.

If their quarterback is up to the task, the 49ers should be considered a major sleeper to run through a rock-solid NFC. 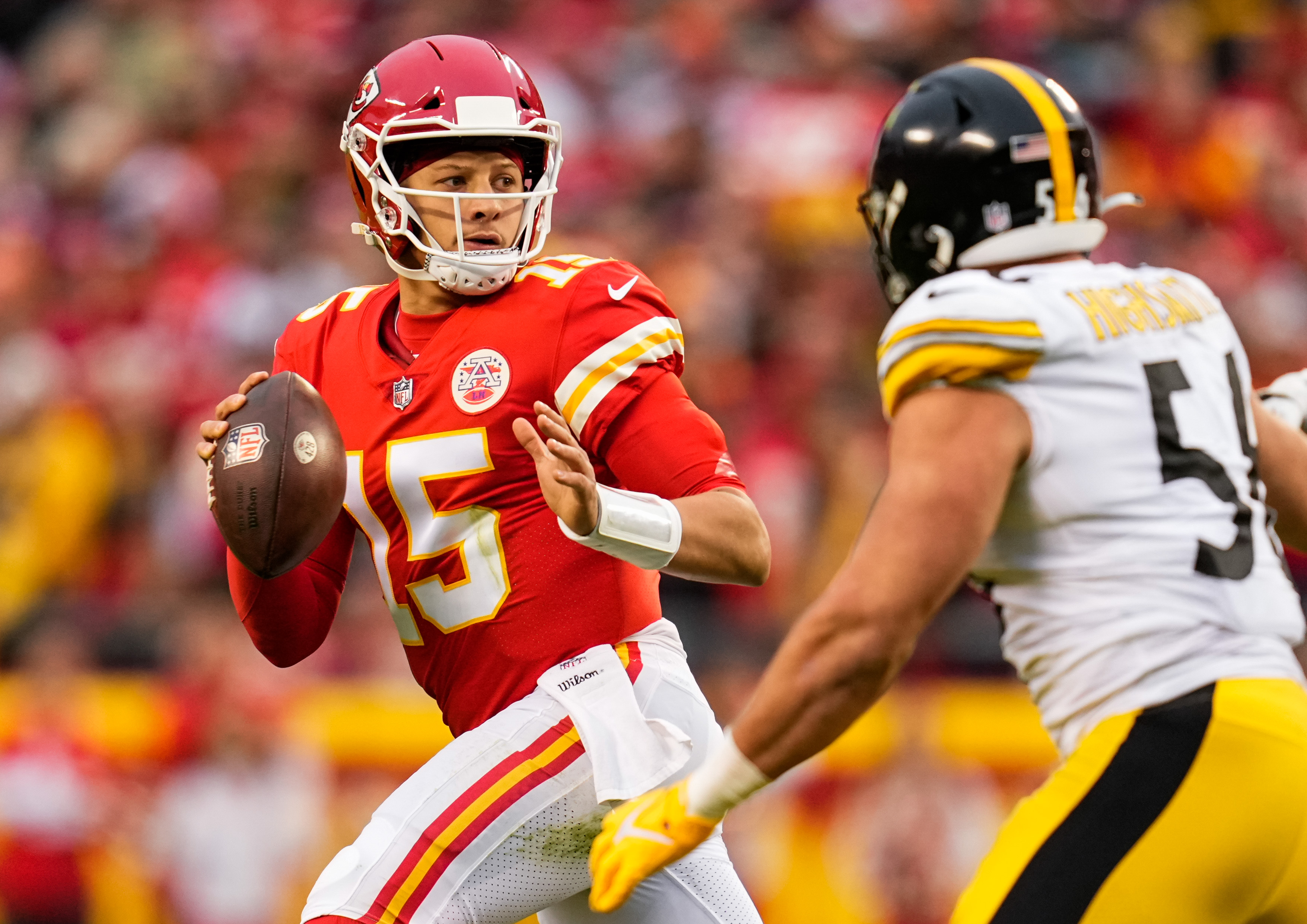 Fatal flaw: Turnovers, and not the apple kind.

If the Chiefs want to qualify for their third-straight Super Bowl, they’ll have to play a lot cleaner football over the coming weeks. Of every playoff team, Kansas City outpaces the rest of the field with 25 giveaways on the 2021 season. That propensity for generosity to the other team is arguably the main reason the Chiefs are even playing this weekend instead of resting.

Much of the turnover blame rests on the primary culprit, Patrick Mahomes, who, while still an incredible player, had a down year by his standards. In 2021, Mahomes threw 13 interceptions—the most in his career.

For many quarterbacks, 13 interceptions in 17 starts would be a godsend. For Mahomes and a team that needs him to do everything and then some, it might be a red flag. 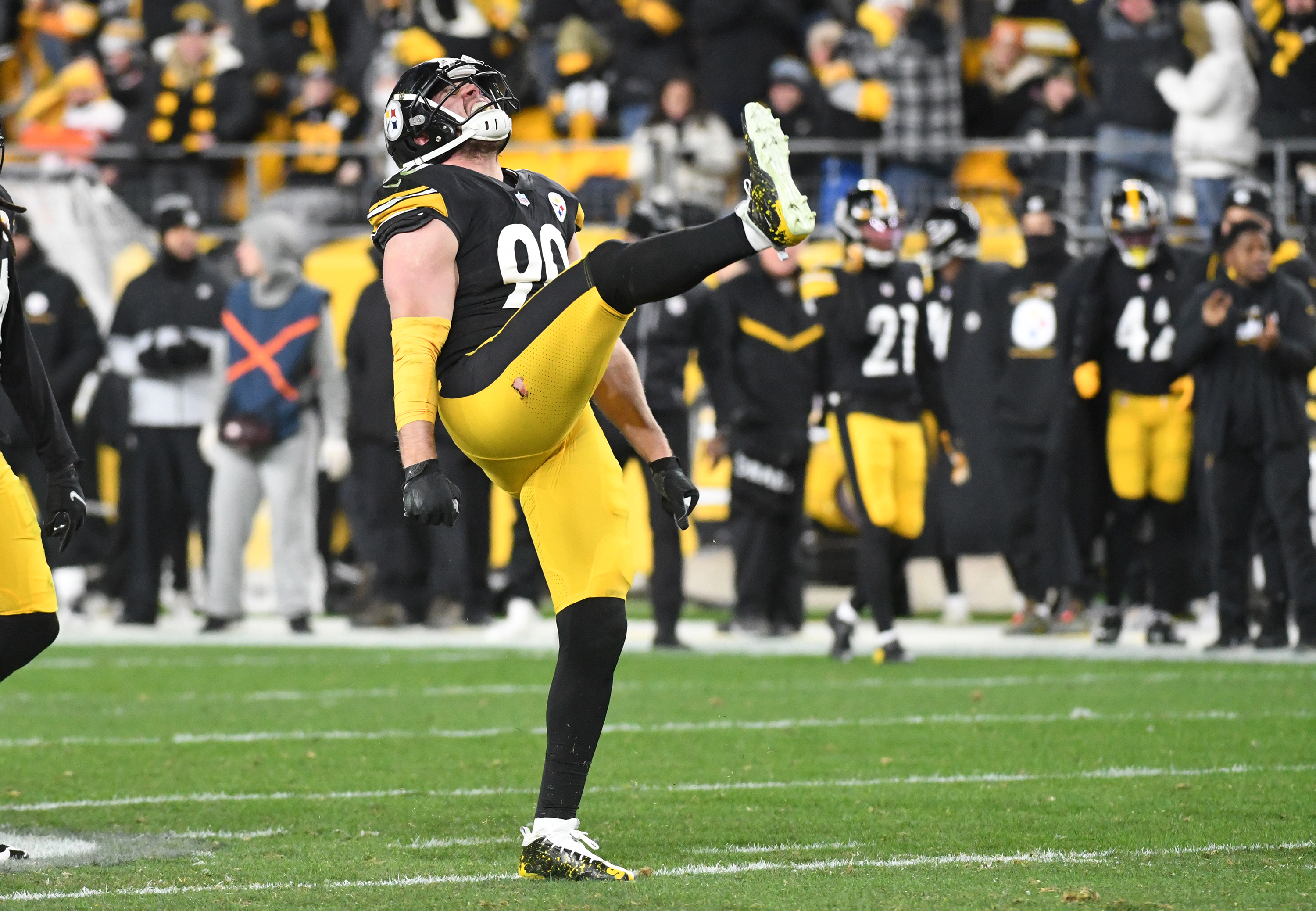 You have to feel for electric talents like Diontae Johnson, Chase Claypool, and Najee Harris. You really do. Because if Ben Roethlisberger was, say, a few years younger, Pittsburgh is likely not only a higher seed this postseason but a serious contender to win it all. And each of these guys would be lighting it up even more than they already do in the process.

Instead, the future Hall of Fame quarterback—set to retire whenever the Steelers’ season ends—is more risk-averse than ever and an outright liability. This year, Roethlisberger averaged a paltry 6.2 yards per attempt (again, you have to feel for electric talents like Johnson, Claypool, and Harris). Not to be outdone, his passes, on average, had only 3.4 air yards per attempt. For comparison’s sake, that sort of super-cautious mark shared company with fellow well-known dynamic quarterbacks such as Jared Goff and Sam Darnold.

No one wins in the playoffs by taking the air out of the ball. Chances are, the Steelers won’t be the first. 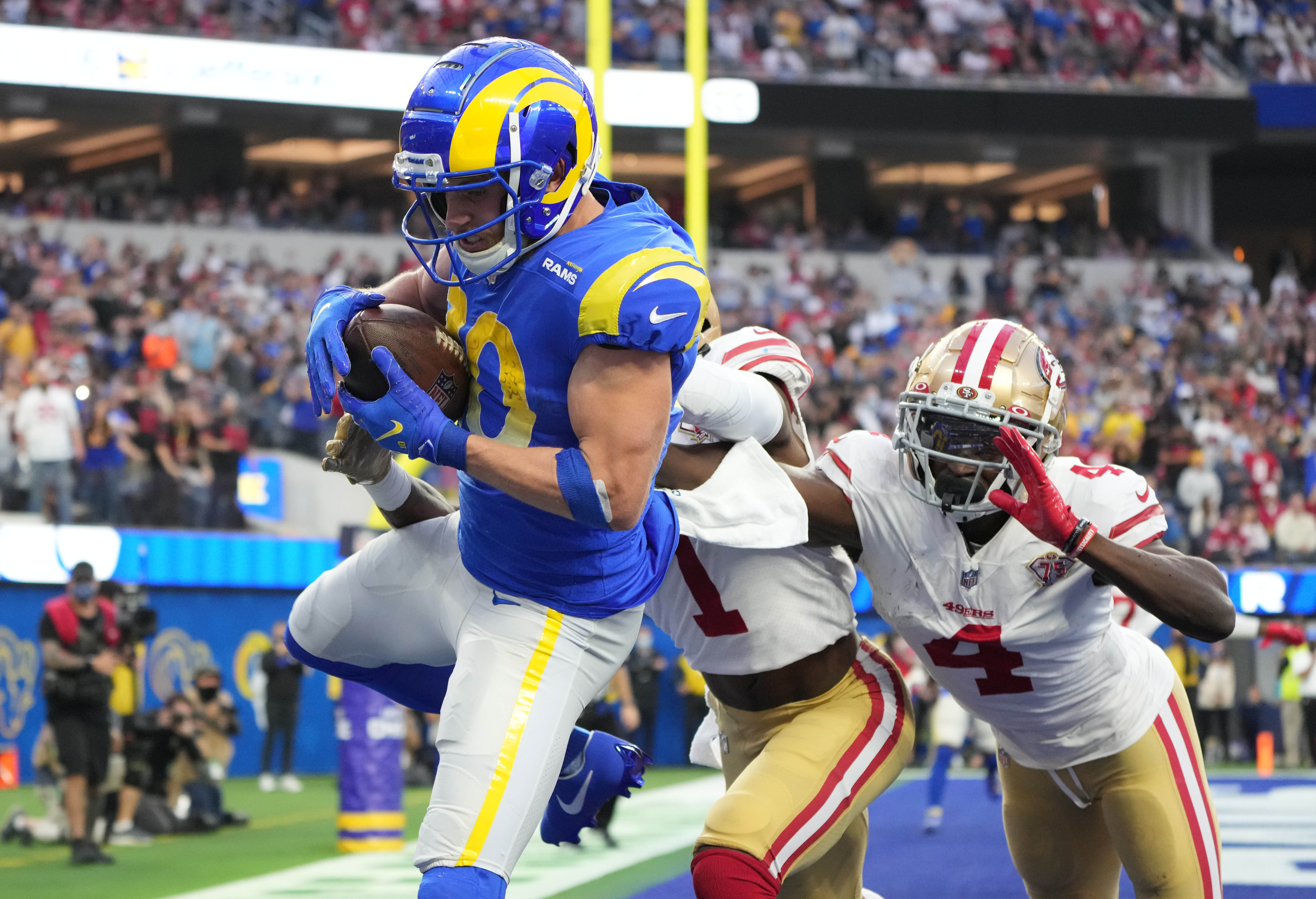 Here’s a fun fact that may interest more than a few.

In his first season with the Rams and a “genius” coach like Sean McVay, Matthew Stafford had a 102.1 passer rating. In 2018, when the Rams made the Super Bowl, Jared Goff’s passer rating was 101.1.

On a more serious note, it’s evident that the Rams, and by extension, Stafford, have missed receiver and captain Robert Woods. Woods, who tore his ACL in early November, was the glue guy of the Los Angeles offense. Cooper Kupp might be the flashy almost-record-breaker, but Woods brought the puzzle together. Every aspect of the Rams’ offense (but especially Stafford) has seen dips without Woods in the fold.

This isn’t to say that Woods made Stafford less accurate and more mistake-prone on his own. But when your receiving core still has Kupp, Odell Beckham Jr., and Van Jefferson, it’s fair to wonder just how important Woods was to the Rams’ entire offensive operation. 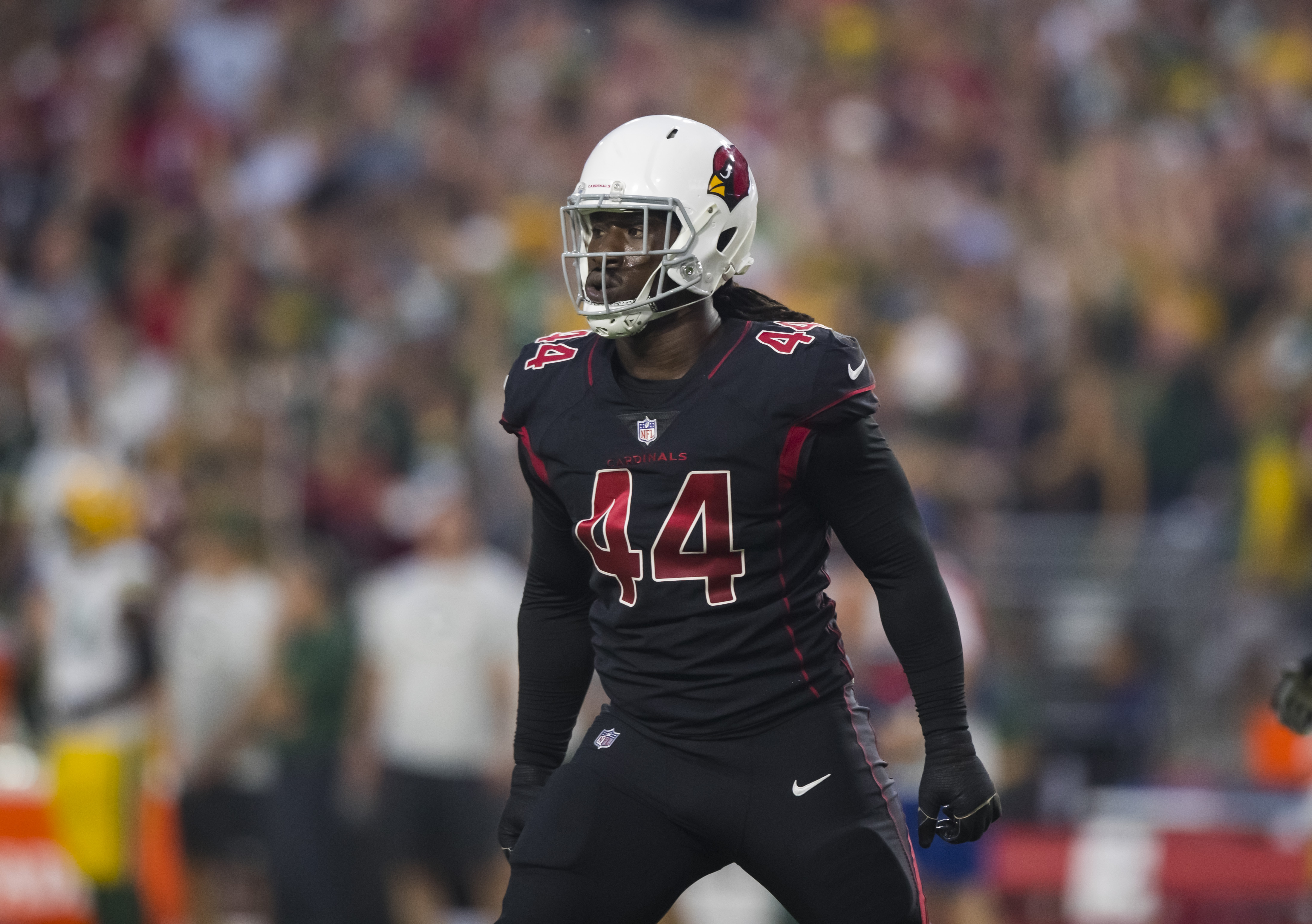 Yes, Kyler Murray hasn’t been the same since he sprained his ankle in early November. And yes, the loss of DeAndre Hopkins, perhaps football’s best playmaker when healthy, has made the Cardinals’ shotgun of an offense more of a popgun.

But it’s Arizona’s defense that should be the primary concern when it comes to any lofty playoff aspirations.

In a five-game home losing streak to close the season, the Cardinals allowed quarterbacks to do pretty much whatever they wanted. Matthew Stafford had but seven incompletions in a rematch. On a poor Seahawks team no less, Russell Wilson cut Arizona up to the tune of three touchdowns on only 15 completions. Even Jared Goff and the juggernaut Lions essentially did whatever they wanted.

Whatever defensive identity the Cardinals had when they started the 2021 season 7-0, it’s gone now. They better hope they find another before it’s too late.

Gannett may earn revenue from Tipico for audience referrals to betting services. Tipico has no influence over nor are any such revenues in any way dependent on or linked to the newsrooms or news coverage. See Tipico.com for Terms and Conditions. 21+ only. Gambling problem? Call 1-800-GAMBLER (NJ), 1-800-522-4700 (CO).